Well, it was quite simple, I wrote an email, and somewhere in the email I wrote “I attached …” this document. Re-read the email and hit the send button.

And this pop-up came up.

Ouf! Thanks Gmail. How clever. I knew gmail was reading emails content to serve targeted ads, but it also tries help user avoid mistakes. How thoughtful. I feel like I have a safety net.

That’s the coolest gmail feature I have seen since the Unsend option. So simple, yet so useful.

There may be good reasons to prefer Paris over London, but weather is not one of them.

An end to the weather debate: it rains just as much in Paris as it does in London.

Whether comparing wet days, rainfall, humidity, or temperature London and Paris are similar. The one noticeable difference between London and Paris is the amount of sunlight each city gets. 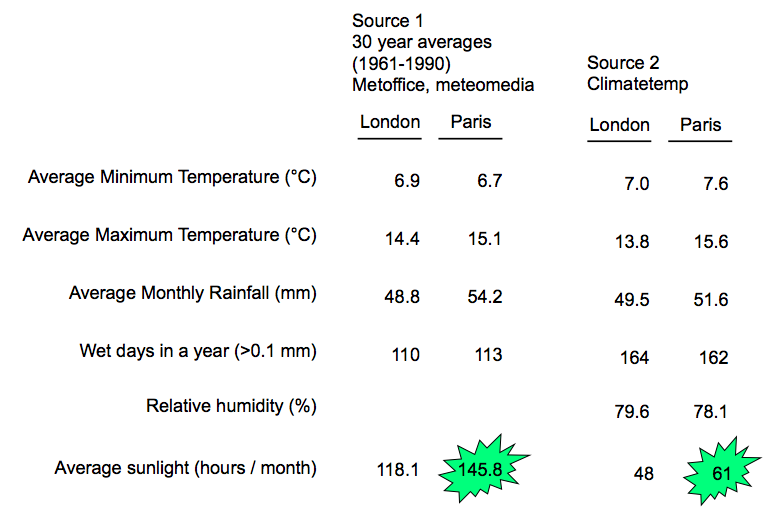 Thank you Francine for the research!

My passion for technology probably started when the first computer arrived at home. It was in the 80′s, the computer was ‘The Macintosh’.

I recall using the two best software available at the time, MacPaint and MacWrite, playing the labyrinth and practicing the mouse control skills. The Macintosh didn’t have a hard drive and the programs were loaded from floppy. Later we managed to get a copy of ‘Load Runner’ and I spent hours digging the brick floor and climbing ladder to escape the bad guys and accumulate treasures. How about a mobile version now? The other games that I had my hands on where MacManager, a simple company management simulator and an adventure game one called ‘Cyclop Saber’.

Until one day I found this strange program sitting on a floppy. With this program, I could look at the hexadecimal of a file and edit it. Making changes to the program. That triggered a lot of those screens:

Never the less, I edited pieces of text and changed user messages on programs. It’s only a few years after that I learnt all about programming, editors and compiling. I guess somehow the magic of creating something and seeing it on the screen remained.