Today there are lots of Internet news sites, reporting, delivering and presenting news, each in different ways, each applying their own touch every step of the process.
I think it will be great to have a single place where you could watch and read all the news from the different providers around the world, with a clear and simple interface, free from intrusive advertising.

Let’s revisit that Confucius experiment with some numbers.

Confucius has 16 followers. He is following them all back. Without planned promotion this wont go very far and growth will be organic. To gain in popularity, Confucius needs to be promoted. This is very much confirming a early Internet web 1.0 moto: ‘If you build it, they won’t automatically come.’

In an attempt to promote or make Confucius more findable, I added the tags #quote and #Confucius when they could fit, which probaly helped a bit.

Interestingly his quotes were re-tweeted 6 times (one quote re-tweeted 4 times). He follows the users re-tweeting. This prompts me to think that we are seeing a little bit of the viral effect here, where the quote are being re-tweeted. Number of re-tweet if a good endorsement metric. It is actual human interaction, as followers sometimes can be simple spam. This is a good indication that the user liked or found value in following Confucius.

Today, I changed the name to Confucius140, which I find a bit more clever.

Next steps are to pro-actively promote Confucius on twitter. Stay tuned.

This is a quick experiment on Twitter. The idea is simple. Create a twitter account where the tweets are relevant to the followers and updated regularly. To start with: no promotion or buzz, no tags, 2 updates per days.  Then play with some of those settings and see how this influence the number of followers / retweet etc… 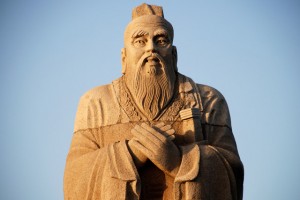 Tweeting famous quotes seems like a good of providing the relevant regular content updates. Confucius must be one of the most quoted and less controversial person. So I created the @confucious__says twitter account, wired it to the TweetLater service and populated some tweets.

With the TweetLater service I also added an auto-follow and ‘auto direct message response’ to new followers, to make this a little more interactive.

I hope to make interesting observations on the number of follower, how it does increase (or not) and how often the updates are retweeted.

Let’s see where this one goes. Next will be to push the feed to Facebook

As Confucius says: “I hear and I forget. I see and I remember. I do and I understand.”

My passion for technology probably started when the first computer arrived at home. It was in the 80′s, the computer was ‘The Macintosh’.

I recall using the two best software available at the time, MacPaint and MacWrite, playing the labyrinth and practicing the mouse control skills. The Macintosh didn’t have a hard drive and the programs were loaded from floppy. Later we managed to get a copy of ‘Load Runner’ and I spent hours digging the brick floor and climbing ladder to escape the bad guys and accumulate treasures. How about a mobile version now? The other games that I had my hands on where MacManager, a simple company management simulator and an adventure game one called ‘Cyclop Saber’.

Until one day I found this strange program sitting on a floppy. With this program, I could look at the hexadecimal of a file and edit it. Making changes to the program. That triggered a lot of those screens:

Never the less, I edited pieces of text and changed user messages on programs. It’s only a few years after that I learnt all about programming, editors and compiling. I guess somehow the magic of creating something and seeing it on the screen remained.